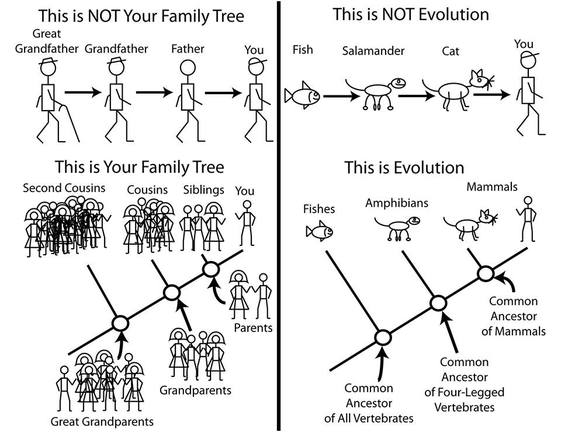 Below you will find a couple of stories that will help you to understand the potentially concept of evolution.  Technically, evolution is genetic mutation information that is passed down from one generation to the next.  In retrospect it often seems like evolution is a process that is done by a species on purpose to adapt to environmental changes - but it isn't.  Rather, evolution is a random process of mutation that gives other animals a reproductive advantage.  It is a bit like a game of broken telephone where a message is covertly passed from person to person and at the end you have an often different message.  If the room is really loud and distracting you will probably have a different message at the end.  If the room is quiet and still the message will probably not change very much.  In evolutionary terms, if the environment was changing dramatically the species would probably also change but if the environment was fairly unchanging (like the oceans), the species would be relatively unchanged.

Please enjoy the stories below and hopefully they will help your understanding. 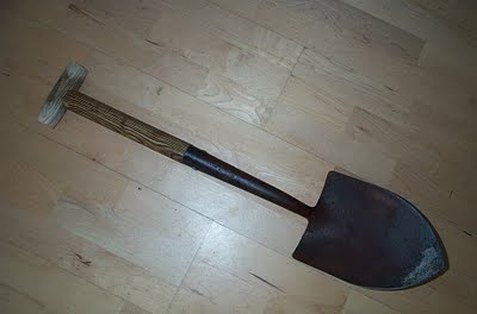 So my Grandpa bought himself a shovel from ACME home hardware in 1930.  It was a small, simple, spade style shovel and worked perfectly for many years.  Eventually, he gave it to my dad who also used it for many years.  A number of years ago my dad decided to buy himself a new shovel and gave me the one his dad had given him. So now, I have my Grandpa’s shovel.   Right?  Or do I?

If you think about it, my shovel is now more than 80 years old and some parts have been replaced over the years.  Let’s break it down.  There are four main parts of the shovel:

The original blade was really good and lasted almost 30 years!  But in 1962, my Grandpa needed to replace the blade.  He bought a new blade, slid it onto the old shaft, replaced the pin to hold the blade and kept using it.  A couple of years went by and the pin that held the blade in place broke and fell out so he got another one and reattached it.

In 1972 my grandpa gave the shovel to my dad and one year later, in 1973, the handle broke.  “No problem”, said my dad and got himself a new handle, attached it to the shaft, replaced the pin and, presto, fixed!  Another few years went by and in 1980 the pin on the blade fell out again (the one my Grandpa had replace twice already).  My dad put a new one in and everything worked fine.

Then, in 1995, my dad gave me the shovel.  I set to work digging out a new garden and hit a big rock and heard a loud crack.  I couldn’t immediately see any damage but in 1996 while using the shovel the shaft suddenly broke in two.  I went and got a new shaft, put the blade and handle on it, replaced both pins, and carried on using my shovel.

This is the trick with evolution.  At which stage does a species become a new species and who determines it?  What if evolutionary biologists disagree about where each evolutionary stage ends and begins?  This is one reason there is so much seemingly conflicting and overlapping information.

Flies in a jar 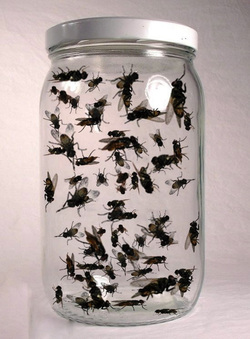 Evolution.  Although it sometimes looks like evolution happens in order to deal with a change in environment, in reality the changes that happen to organisms are actually random and it is the affect on survival that those changes have that determine the evolutionary path of a creature.  It sounds confusing but lets look at a really simplified and hypothetical example.

Imagine there were 100 flies of the same species in a big jar.  While every individual is different, for the most part, the flies will have similar basic needs in terms of food and similar tolerances for moisture, light, and temperature.  Make sense so far?  For now, lets just focus on temperature.

If the flies can live comfortably with temperatures ranging from 19°C to 21°C, then we have a 3°C degree optimal survival temperature range.  This probably means that the vast majority of the flies will be most comfortable at 20°C and will be okay as long as it doesn’t get too cold or too hot.  If someone turned up the heat to 25°C all of a sudden what do you think would happen?  Yup.  You guessed it.  No more flies.  But what do you think would happen if someone turned up the temperature to 21°C?

Many, maybe even most, of the flies would be uncomfortable.  But there would probably be a few flies that would be very happy with the new, warmer temperature.  Just like people who prefer the heat or the cold, so too is every individual fly, and every individual organism made a little differently than the rest of its species.  And simply because fly is born differently, some of the flies would thrive at 21°C.

For the sake of argument, let’s say that out of the 100 original flies 5 would love the new living conditions.  The good thing about being well suited to their new temperature is that these 5 flies would probably live longer healthier lives and end up having more baby flies than the flies that prefer cooler temperatures.  And these warm weather fly babies would probably inherit the warm weather preferences from their warm weather parents.  Furthermore, some of those flies would have an even greater tolerance for heat and may be comfortable up to even 22°C.  And while all this is happening, the flies that are uncomfortable in 21°C temperatures would live shorter, less healthy lives in their uncomfortable surroundings and would probably have less fly babies.  Also, the babies that they have would probably be uncomfortable in the heat as well.  So now we have a group of highly uncomfortable, unhealthy flies, a group of flies that are mildly uncomfortable, and a group of perfectly suited, happy flies all competing for the same resources to survive.  As you can imagine, it won’t take long for the more heat tolerant flies to completely take over.

Now, let’s extrapolate.  If slowly, every few generations someone turned up the heat 1 degree at a time, it seems reasonable that after a few thousand generations there could be flies in the jar that would be comfortable up to temperatures of 30°C.  If this was the case, these flies would undoubtedly be considered a new species, but like my Grandpa’s shovel, it is difficult to determine where exactly the new species started and the old one went extinct.

Now imagine instead of flies, we are talking about early species of humans.  And instead of a temperature controlled, hermetically sealed jar we are talking about climate change happening over millions of years.  Throw in some predators, cosmetic mating preferences, and bad luck and the whole business gets very messy indeed.  Add to that the difficulty of finding extensive fossil records of every evolutionary stage and we see that the historical record of human evolution is extremely difficult to track.